How can we create commercially viable green hydrogen ecosystems?

The potential of clean hydrogen as a sustainable fuel source has earned significant attention and investment in recent years as a key component of the global energy transition. We need to think more holistically about the clean hydrogen value-chain.

There has been much debate around the role and potential for hydrogen to drive our collective net zero future. However, we believe that discussions need to pivot from ‘whether we use hydrogen’ to ‘how we enable clean hydrogen energy systems’?

Clean hydrogen will be a critical tool in the drive towards limiting global warming to 1.5 degrees Celsius. Whilst not relevant for sectors where electrification has much stronger potential, it will be critical to abate the use of gas and coal in key industries such as ammonia production and steel.

High potential hydrogen vs. electrification use cases to 2050 (Exhibit 1) 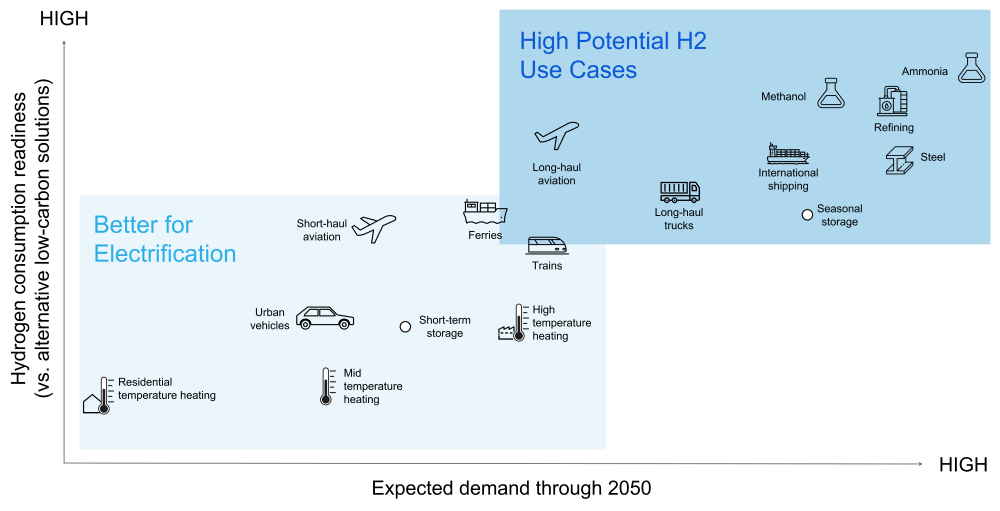 The ability of hard-to-abate sectors like ammonia and steel production to deliver their net zero transition plans will rely on the production of carbon-free hydrogen; and already plans are being adopted within many management strategies to phase out the use of fossil fuels. This is reflected in energy-use forecasts where the global hydrogen market is anticipated to grow at 6.5% CAGR over the next several decades. Indeed, hydrogen demand is expected to reach 614 million metric tonnes per annum and represent 12% of total energy use.

However, we will only be able to achieve this scale of consumption and corresponding emissions reductions if we can ensure the commercial viability of our future clean hydrogen energy systems. We believe there are three critical steps to doing this.

Stimulating demand from day one

The first critical step should be identifying and aggregating demand. Clean hydrogen is a unique energy fuel with specific use cases and cost profiles across a selection of industries. Creating a clean hydrogen energy system requires us to identify and engage appropriate clean hydrogen customers, and hydrogen-based product consumers, who match the cost profile offered by the producer.

The other consideration is that hydrogen production is an economy of scale play, and therefore identifying and aggregating local industrial demand across multiple sectors is not just a way to de-risk the project but also a way to reduce average costs. Key anchor customers can belarge ammonia plants, DRI steel furnaces, or refining centres. Defining and co-ordinating industrial clusters should be a critical step to creating commercially viable clean hydrogen ecosystems, including by taking advantage of economies of scale to lower production and transport costs.

Getting the location right

The second critical step is choosing an optimal production location that that will lower overall transport costs. This will be key to ensuring clean hydrogen remains cost-viable for the high potential clean hydrogen customers identified above.

Looking at green hydrogen, our levelised cost modelling using procured quotes from suppliers across global supply-chains demonstrates that current production costs could be as low as $3-5/kg H2 depending on your price of renewable electricity. In fact, renewable electricity accounts for 60-80% of the total production cost for green hydrogen. However, at distances over 100km, the average cost of hydrogen can jump significantly. Above 100km, conversion and transportation can account for 60-80% of the landed cost of hydrogen to the consumer. Further, conversion and transport can also lead to up to 40% energy losses.

Collectively, these factors signify significant impediments to the viability of a hydrogen business and that location and transport need to be considered before a plant is constructed. It is much easier to bring the hydrogen plant to the steel mill, than it is to move a pre-established steel mill to a new hydrogen plan. For these reasons co-location between production and consumption to lower conversion and transport costs becomes crucial to creating commercially viable clean hydrogen ecosystems.

Being In the driver’s seat

The third critical step concerns the roles for industry, government, and finance. Given the complexity of the change required, we believe green hydrogen ecosystems must be driven by industry, with government and finance as important enablers.

Creating commercially attractive hydrogen business cases that work today without needing significant policy change will be key to accelerating the production and consumption of clean hydrogen. Where there is a requirement to boost a business case through policy change (for example, tariffs on grey imports to protect emerging green steel markets), then the onus should be on industry to take the lead on guiding governments on the support they need.

The same is true with finance where industry should work with finance collaboratively rather than treating them purely as arms-length bankers. In our experience, we have seen government and finance as willing partners if they can be directed. However, this direction needs to come from industry who alone can calculate the business case and requirements to make clean hydrogen commercial viable.

Ultimately, clean hydrogen will not just be a critical component to achieve the 1.5 degrees Celsius ambition set out in the Paris Agreement but can also be a significant business opportunity if hydrogen ecosystems are designed in the right way. Xynteo has played a leading role in helping organisations across the globe unlock the potential of such models. Uniquely, compared to other energy systems, the important factor is to remember that clean hydrogen is an ecosystem play that requires special consideration around demand, the physical positioning of the value-chain and leadership from industry.

If you would like to discuss more about your hydrogen ambitions wherever you sit across the hydrogen value-chain (inputs, production, transport or consumption), please get in touch.

Stay up to date on Xynteo and The Leadership Vanguard by following us on social media. LinkedIn  I  Twitter

Or contact us to find out how we can help your leaders and organisation create planet-positive and inclusive growth.